It will be a new platform for interacting with data and APIs.

Currently it has a visual JSON editor. If you go to Examples > Pokemon on desktop or paste request get https://pokeapi.co/api/v2/pokemon/bulbasaur into it on mobile, you can see the JSON editor. It will soon be able to make any kind of API request, like Postman.

I think the market is, on average, more supportive of #foss and #indieweb products and services than seed stage and angel investors are.

My friend Andrew Hyde recently launched a really cool service for freelancers called pick.im (pronounced (pick ’em). Here’s what it looks like in Mobile Safari on the iPad:

It searches based on three things: location, type of service, and budget. Yet one of them doesn’t show up in the form: the location. The location is auto-detected using either HTML 5 or the ip address. If it gets the location wrong, it can be changed on the results page.

When I use my iPad, I like being able to accomplish many tasks without using a keyboard. Subtle changes to a design are sometimes needed for this to work in practice. Pick.im could show the guessed location before searching, but it doesn’t. If pick.im guessed Denver when I was in Boulder before searching, I might correct it, even though I would get reasonable results with Denver selected, due to its proximity to Boulder.

While I really dig the minimalistic design of pick.im‘s search, that’s not all there is to it. Andrew has big plans for it, including helping freelancers spend less time dealing with things like billing and accounting, and more time doing the kind of work they enjoy. For that, the interface will need to be more complex, but by the time people see that, they’ll have already started using it.

It’s nice to hear about new businesses starting up right here in my town. Boulder has a lot of exciting startups right now, and the summer hasn’t even started.

I’ve become a somewhat avid twitter user over the last several months. It’s helped me to stay in contact with existing friends and to get to know a few people from Refresh Phoenix, a local web design/development club. For those who don’t know what it is, it’s like LiveJournal, except each blog entry is limited to 140 characters, the friends feature works slightly differently, and it has good integration with SMS.

A couple of things I really like about it:

One of my favorite web apps for finding news is TailRank. TailRank indexes thousands of blogs, and shows news that is that is being discussed by lots of legitimate bloggers. On their page, there are a bunch of stories, each with one main blog and a sampling of other blogs that reference the story. If you click on a link, it shows all of the articles that were grouped with that story. Usually, on pages that make the front page, there’s somewhere between 5 and 50 links to blog entries per story. Things that lots of bloggers comment on tend to be interesting. For example, today I found the following articles:

There are other things to like about TailRank — it has a great UI and is based on great technology. There’s a lot of information to be had on the front page. This is made possible because TailRank is well-cached. It’s very smart about which posts it lets into the system, and it keeps out many poorly-written and spammy blog posts. The UI is beautiful, from an aesthetic standpoint. The colors are great and it’s uncluttered. There are visual snapshots of each post. All around it’s an amazingly neat product. For what it does, it does a great job.

The founder has done a very good job of setting up infrastructure and putting together a programming team with a minimal investment. At first, according to him in a podcast he did (which also contains information on the caching), it was just him and he did some outsourcing. Now, according to an article linked to on the TailRank blog, he’s got one developer working with him in person in San Francisco. They’ve just released an API for using their blog search engine (short article).

Since I’ve been spending too much time on reddit, I have started using TailRank more, because a higher percentage of its articles are interesting. I think this is because reddit lets people frivolously increase the ranking of stories that they agree with, even if they aren’t interesting. To write a decent blog post about a subject takes time.

Another nice thing from a productivity standpoint is that it lacks comments in the reddit/Digg sense. It is in itself, focused on comments, though. It is a bit more difficult to write comments. You have to have a blog with interesting content and get it recognized by the search engines.

In my opinion it’s the best way to write comments, though. The person on whose site you’re commenting can’t delete your comment, since it’s on your on blog. They can delete a trackback, but they can’t delete it on TailRank. It also makes it easy for other people to find what you’ve written. And, of course, it’s better for marketing, since it brings people to your website.

Valentine’s Day was fairly uneventful for me this year, but humankind made significant progress that day. Trevor Blackwell, a very smart man and a friend of Paul Graham, got his robot, Dexter, to walk with dynamic balancing.

The video is one of the most amazing things I’ve watched in my life. It was like the first time I saw a video of Apollo 11 lifting off. Its heroic effort to walk like a human walks, and to stay up on two feet, is amazing to see. I can see Trevor Blackwell’s effort in the robot’s movement. It looks like the robot is feeling the moment.

Trevor’s creation is at Anybots, Inc., a company he founded that develops robot software. They have a website, and they’re hiring. A requirement in the “Join Our Team” page is hubris — one of the three great virtues of programming.

Dharmesh Shaw posted a humor piece to his excellent blog at OnStartups.com. I thought the part for strategy type was the funniest (particularly because I’ve had a strategy type for a supervisor before):

Strategy Type: Forget the light bulb. We need to stop skating to where the puck is, and skate to where the puck is going to be. In five years, there will be no light bulbs to change. IÃ¢â‚¬â„¢m going on an executive retreat next week and plan to return with a vision statement that articulates how we will leverage our core competencies to erect a formidable barrier to entry in the $1 billion market for LaaS (Light As A Service).

No longer am I going to cringe every time I hear the word “enterprise”.

Before looking it up, enterprise to me meant “big” or “expensive”, as in Visual Studio Enterprise Edition.

But today after wondering what kind of a software developer people are looking for when they use the word “enterprise”, I had a look in the dictionary. The fourth meaning in The American Heritage Dictionary’s definition is:

This is a great quality to have, on both the large scale and the small scale.

I found a good example today of large-scale enterprise today, from the Daily Sun’s (Flagstaff’s local newspaper) revamped online job listings. A year ago, they were using their own setup. It worked, but had poor search functionality and a clunky UI. Now they’re simply linking to a customized portal by NowHiring.com. They have their logo up there, some generic graphics, and a website that works well. I applaud the developers of this software for seeing the problem the newspapers had and coming up with a elegant solution.

A good example of small-scale enterprise might be taking on a project to document or refactor some code, or implementing one of the things on The Joel Test.

Now when I hear people talking enterprise, I’ll give them the benefit of the doubt and listen to what they say, in hopes that they’re talking about true initiative, and not just trying to sound big. 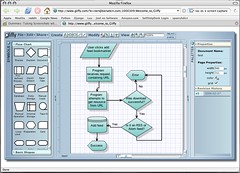 Gliffy is a pre-launch startup, which makes a program for collaborative drawing. I signed up for the beta a few weeks ago, and just got invited today.

While I haven’t tried out the collaboration feature, I am pretty impressed by the program overall. First, I was surprised that it actually worked, until I found out it was written in Flash (after which the only surprise was that copy and pasting text worked). I am also impressed by the use of screen real estate. All of the features needed to do a drawing are given space, and it is much less cluttered than Microsoft Office (don’t even get me started on Office 2007 or Windows Vista). Another thing that impresses me is the versioning system built into it.

I think with the new crop of office applications, including those from 37 Signals, and a web app to tie them together that hasn’t been invented yet, we could start to see a shift from desktop office applications to the web in half a decade or so.

I just thought I’d share this thing I noticed with anyone from Startup School who might still be reading my blog.

After Startup School for Hackers there was an Open House at Y Combinator, a unique Venture Capitalist firm started by Paul Graham and others. I might apply for funding for their 2005 summer founders program. Y Combinator’s office was in a home-type building in a neighborhood in Cambridge. They’re moving to Silicon Valley for the winter, though.

A punch of the address to google maps reveals that in Silicon Valley they’ll be using a traditional office building.

The Startup School is excellent. About two thirds of the talks have been given, including talks by Paul Graham and Steve Wozniak.

Paul Graham had another interesting mathematical observation that nobody else ever seems to come up with. He said that there is an even smaller percentage of female software company founders than there are females in the computer field. He explained that this is because people generally hang out with people of the same sex, and so the minority is reduced to an even smaller minority when we’re talking about partners. Then he tied it together with a joke: “Never attribute to malice that which can be explained by math”.

Steve Wozniak’s talk was amazing. He talked about starting Apple, and the goal of creating a complete computer system.

Michael Mandel, Chief Economist of BusinessWeek, said that he expects a boom right now, because of people like us, who are starting companies.

I asked a question at the end of the talk and used the word “lifestyle”, which for me meant whether people do things online or have to talk to people on the phone, working hours, etc. Almost everyone burst into laughter after my question. I think it’s because they heard the word “lifestyle” and thought of “alternative lifestyles”. Should have known. I hope I’m not visible in the video!